What Bitcoin’s rising price is costing the planet

Bitcoin “miners” use as much electricity as entire countries 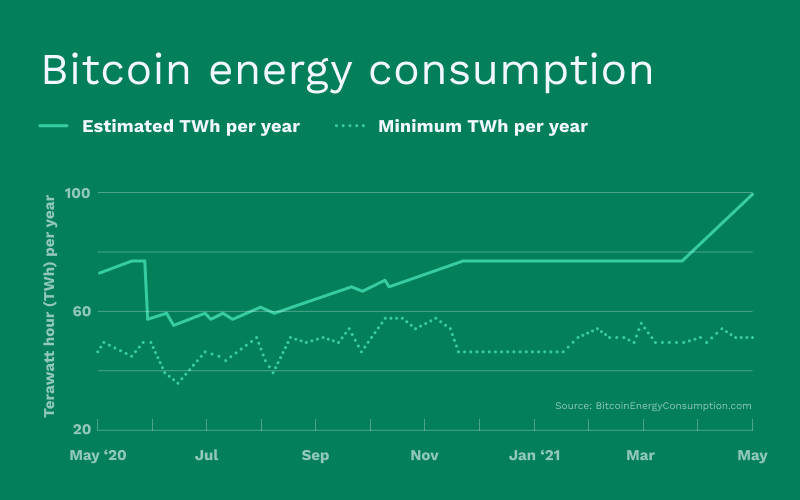 Late last year, Square and PayPal began letting users buy, sell, and even transact with crypto. In March, J.P. Morgan announced an investment product that gives buyers exposure to crypto through Bitcoin proxy stocks. And last Wednesday, Coinbase — the startup that lets users buy and sell cryptocurrencies — made its stock market debut, earning an eye-popping valuation of $85.7 billion. It’s happened. Cryptocurrency (specifically Bitcoin) is officially mainstream. And as Bitcoin’s price has skyrocketed, so has its carbon footprint.

Bitcoin is digital, but that doesn’t mean it appears out of thin air. Bitcoin transactions must be recorded on a digital ledger known as the blockchain. It’s up to “miners'' to verify those transactions, using computers to solve complex mathematical equations. In exchange for their work, miners create and lay claim to new bitcoins. Back in 2009, it was possible to mine on the same computer you used to write history papers. That’s changed as more miners have entered the market and the currency has become more scarce. Of 21 million bitcoins available, over 18.5 million have already been mined. Mining today requires special computers with powerful processors that suck up a lot of electricity. How much? The amount of electricity used to mine Bitcoin is comparable to the power consumption of entire countries — Kazakhstan for one. And Bitcoin’s annual carbon footprint is on par with Norway’s.

It’s not just the amount of energy used that’s causing concern. Miners tend to go wherever energy is cheapest — which often means countries that rely heavily on fossil fuels. China is the global leader in Bitcoin mining by a long shot, and two-thirds of its electricity comes from coal. Bitcoin enthusiasts admit some Bitcoin is mined using nonrenewable energy, but plenty is mined with hydro, nuclear, or natural gas that otherwise would be released into the atmosphere. And if mining computers were attached to a solar- or wind-powered electrical grid, mining could become greener. Defenders also point out traditional financial institutions have a sizable carbon footprint too, but don’t face the same scrutiny. And to put Bitcoin’s massive energy consumption in perspective, they may ask you to consider the energy wasted each year by plugged-in but inactive devices in all US homes (think: your idle cell phone charger or toaster). That energy could power Bitcoin mining for 1.5 years.

The world’s second most valuable crypto could help curb the environmental impact. Ethereum will soon use a system called “proof-of-stake” to process transactions and build the blockchain. This method doesn’t require supercomputers solving complex mathematical problems or sky-high energy usage. Instead “validators” work together to create and verify new blocks.

Beyond Bitcoin, it’s the underlying “blockchain” technology that might make it to the history books. Blockchains are thought to be unhackable, but they’re also publicly shared. (This guy explains it better.) Some say this system of record keeping is more secure than the encryption technology banks rely on and could even help combat wealth inequality on a global scale. Meanwhile, with thousands of cryptocurrencies cropping up, it’s possible a more eco-friendly alternative could dethrone Bitcoin, spelling a greener future for the 21st-century currency.

Your used car could be worth more than you paid

Hosting the Olympics is bad business