Plus, the cost of fleeing from Ida and Biden poaches from Big Tech 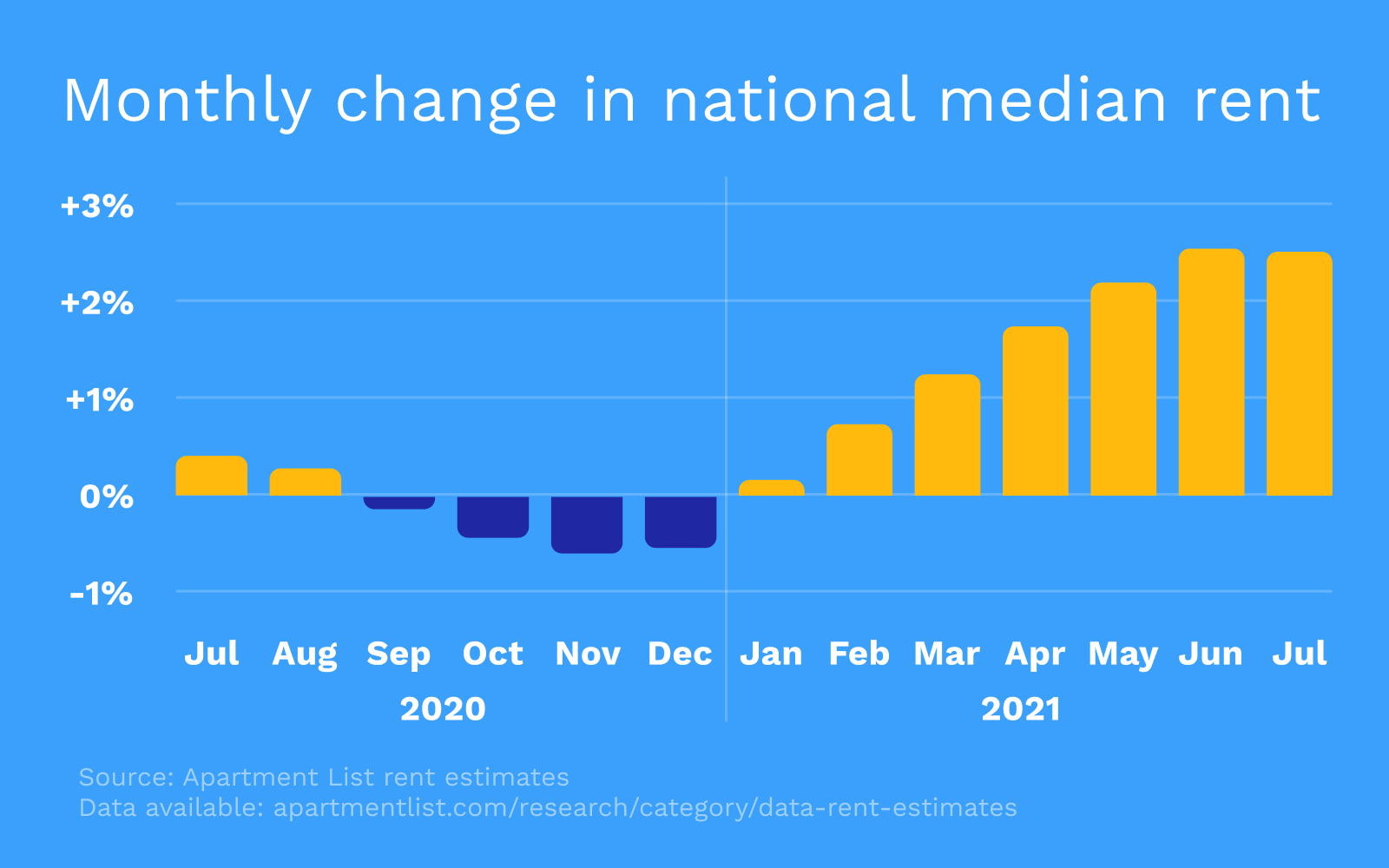 Hate to break it to you, but expensive rent is back. US rents are up 11% this year, compared to just 3.3% in the first half of 2017, 2018, and 2019. Prices have rebounded to pre-pandemic levels in 87 out of the 100 largest US cities. (At $2,810 for a 1-bedroom, NYC just dethroned San Francisco as the most expensive city.) And in smaller cities — from Boise to Bend — rents are up over 30% since March 2020. Economists have a few theories to explain why. For one, those who moved in with family during the pandemic are striking out on their own again, and a stable job market is partly responsible for the uptick in new leases. Meanwhile, renters who scored jaw-dropping deals a year ago could be in for a rude awakening. As discounted leases come up for renewal, some landlords are hiking prices by 50% or more. The good news is rental relief programs still have billions of dollars in aid to distribute.

On Monday, the White House unveiled a new program, dubbed the US Digital Corps, aimed at attracting fresh tech talent to public service. Through a two-year fellowship, young technologists (think: software engineers, data scientists, designers, and cybersecurity specialists) will engage in high-impact work while helping the government adapt to shifting IT challenges. Fixing notoriously clunky .gov websites could be just the beginning. The team will address priorities like coronavirus response, economic recovery, cybersecurity, and streamlining government services, hopefully bringing some Gen Z energy to the office along the way. Currently, only 3% of state employees are under 30 — a generational skills gap that this program could help close. But competing with Silicon Valley for talent isn't going to be easy. Companies like Facebook and Google are known for generous salaries and attractive perks. On the flip side, many young people are motivated by mission-driven jobs, so tackling national problems like climate change might be enough to lure them in.

Too poor to leave

As of Thursday, hundreds of thousands of households in Louisiana are still without power, days after Hurricane Ida hit its coastline and shattered its power grid, before moving north to flood the Midatlantic. (If you've been affected, you can apply for disaster assistance.) While Louisiana evacuees have been told to stay away until electricity has been restored, some residents couldn’t afford to leave in the first place. According to a January survey, only 39% of Americans have the funds to cover an unexpected $1,000 expense. So, it’s unsurprising that low-income families don’t have cash or gas to flee to safer locations out of state. From Hurricane Florence in South Carolina to Laura in Texas, storms have shined a light on how extreme weather events and economic inequality can collide in disastrous ways. Ida is just another reminder.

Ready to retire your BESTA cabinet? IKEA might buy it back from you. This month, the Swedish retailer is piloting its Buy Back & Resell service at an IKEA outside Philadelphia. The program accepts gently used and assembled furniture that’s then resold in the store’s “as is” section at discounted prices. In exchange, you’ll pocket store credit. Famed for its disposable furniture (and meatballs), IKEA hopes BB&R will help it shed its fast-furniture rep and become climate positive by 2030. The program was first launched last year across 27 countries, but IKEA Conshohocken is the first US location to offer the service (although probably not the last).