After decades of skyrocketing costs, tuition heads back to Earth 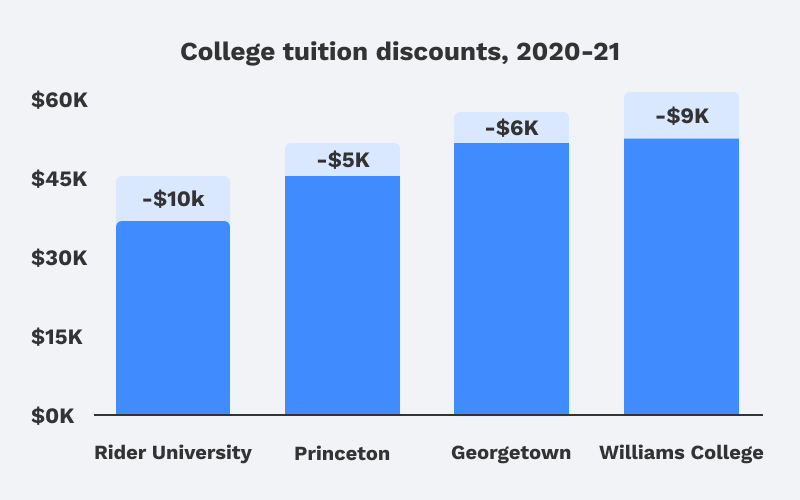 Covid-19 changed college. Will it change its price tag?

The list of higher ed hallmarks changed by the pandemic could fill an (overpriced) textbook: football games, extracurricular activities, dorm life, campus visits, and, of course, classes. While there’s plenty to miss, one change many students (and parents) will welcome is a lower price tag. Some schools are offering tuition discounts to those willing to enroll, ranging from 10% all the way to 100%. And new data suggests this change may be more than a single-semester blip. The decades-long growth of college tuition prices may have hit a ceiling this year, but the jury’s still out on whether it’s on its way up or down.

Major tuition cuts for 2020-21 are making headlines across the country, even at prestigious universities. Ivy League institution Princeton University announced a 10% tuition reduction for students taking classes remotely, as did Johns Hopkins and Georgetown University. And that’s near the low end of the discounts. Williams College (15%), Hampton University (15%), and National University (25%) have all thrown in immediate tuition cuts. Some universities are getting creative with the tuition tactics — MIT gave students a one-time “Covid-era” grant of $5,000 this fall, while Davidson College told students they could delay their fall bill until August 2021.

And even where there’s no discount...

There are few upcharges to be found. According to the College Board, tuition has increased at a 1.1% rate in public institutions, and 2.1% at private institutions — the smallest increase in three decades. And US News and World Report detailed an even better bargain for our collective colleges. Its survey results say that private schools have reduced tuition by 5% year-over-year, while public schools have cut tuition by 4% and 6% for in-state and out-of-state students respectively. While these accounts differ, there’s no debating that at least ten states have announced tuition freezes across their public universities, as have privates like MIT and the University of Chicago.

It’s overdue… but is it enough?

The soaring cost of tuition is no secret, but just how recently and rapidly it’s grown can evoke dining hall flash mob-levels of unwelcome surprise. The cost of in-state tuition at a public university increased by 72% between 2008-2021. It’s created a situation where student debt has tripled over the last decade. Tuition now accounts for half of total university revenue, up from a quarter thirty years ago. This rapid outpacing of both inflation and family income begs the question of whether modest discounts make a difference. Even a 10% cut at Princeton still means a $48,501 tuition bill and a $69,821 total cost of attendance for 2020-21 — $1,118 more.) than the average family’s median income. For some, these tuition reductions simply don’t make up for the loss of education quality for the 90% of institutions planning to use both in-person and online classes while charging the same price for both models.

And with instruction gone remote, students are changing the channel

The National Student Clearinghouse says enrollment across all colleges has seen an overall decrease of 2.5% in enrollment this semester. That may seem like a small figure, but universities are already bracing for financial losses as students opt for less expensive schools or delay college altogether during the pandemic. A McKinsey report suggested the revenue loss for universities could be as large as $19 billion. But not all institutions are rushing to react. That loss would still account for less than half of the more than $40 billion endowment at Harvard, which has no plans for tuition cuts, this year or the next.

So, what’s the cause for hope?

By choosing less expensive options en masse, students are making their feelings clear about the lowered value of being on campus during a pandemic. And some experts believe that universities will be forced to continue cutting prices as a result. Rider University and Farleigh Dickinson University both announced they’re decreasing tuition by at least 22% next fall, while Pacific University is promising a $1,450 grant to enrolled students that could renew for up to four years. And Southern New Hampshire University is taking it a step (or 100) further, completely eliminating tuition in 2020, and promising a tuition cut of 61% next year for students who opt to attend SNHU. And opt-in they have: on-campus enrollment is up 45% over last year. Whether these examples are outliers or harbingers of lower college tuition rates to come is uncertain. But the fact that the discounts will continue into 2021 is assuring — although simply finishing 2020 may be the greatest relief of all.

Another $1,200? States seek their own stimulus aid

This job pays you $2,500 to watch holiday movies

This country went broke. Then it went cashless