These internships pay more than $7K a month

For interns, opportunities — and salaries — are rising 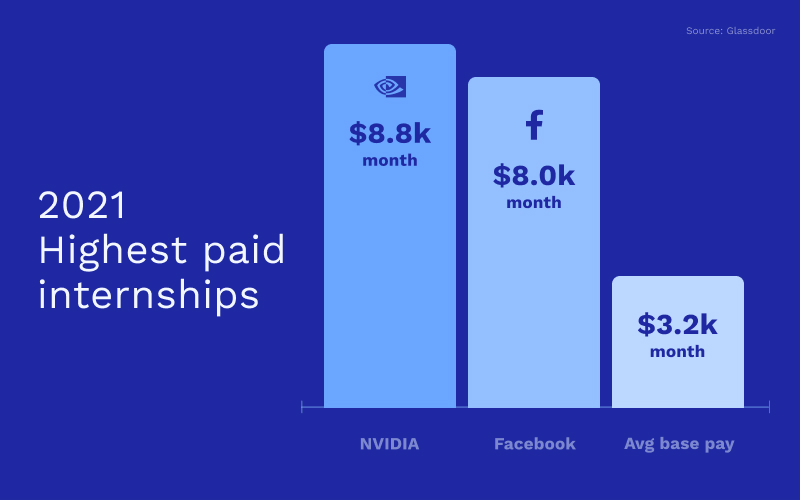 The pandemic has hit young workers particularly hard. Last summer, the unemployment rate for 16- to 24-year-olds jumped to 18.5%, about twice as high as a year earlier. Since young people predominantly work in leisure and hospitality, they disproportionately suffered job loss in an industry that has struggled to survive. Along with full-time work, internships for college students dried up as companies paused or cut their intern programs. But hiring in this area is looking up.

While it may take years to recover from the economic effects of Covid-19, college students and entry-level employees can look forward to more internship opportunities this summer, especially in industries like tech and finance. Since companies tend to have a harder time hiring in these competitive industries, internship programs meet that challenge by offering jaw-dropping wages to attract talent. Several of the top-paying internships pay nearly double the median earnings of full-time workers in the US. From roles in autonomous vehicles to machine learning, here are the highest paying internships for 2021 and their median monthly pay:

Not all internships are created equal

While some internships tout high pay, most interns are still fighting to get paid at all. The debate over unpaid internships has taken off in recent years, and it’s easy to see why: 43% of internships at for-profit companies don’t pay. Last month, a reporter’s tweet about her career path reignited the conversation. She described her unpaid internships as a necessary way to “pay your dues.” People responded that such messages can normalize exploitation and create barriers to entry for people of color and lower-income individuals who can’t afford unpaid labor.

Earlier this year, the nonprofit Pay Our Interns urged the Biden administration to crack down on unpaid internships. Founded by two interns in 2016, the organization is fighting for an increase in the amount of paid internships across all work sectors. In the Senate, Sens. Cory Booker and Tim Scott have introduced a bipartisan bill to make State Department internships paid and help cover interns’ transportation and housing costs with the aim of increasing diversity. While interns outside of tech and finance may not make the big bucks like their peers at Facebook, they might earn the right to some compensation if the larger paid internship movement picks up.