Rent or buy? 64% of young homeowners have regrets

Plus, why baristas hate TikTok drinks, and the companies boosting pay 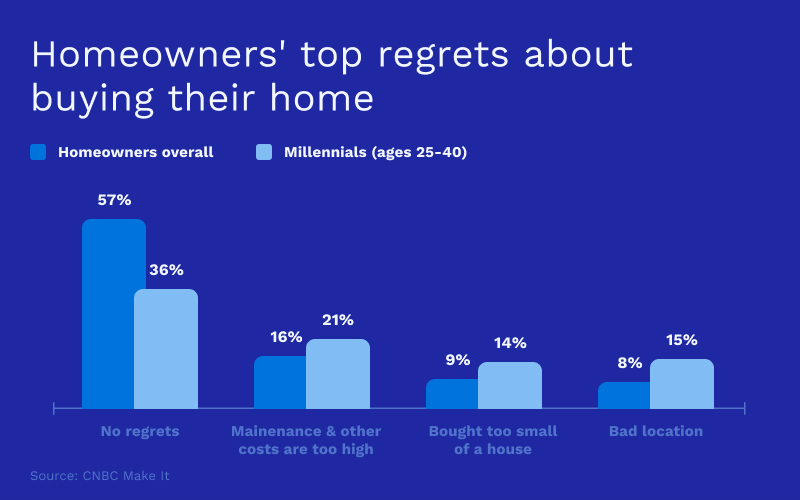 The US is in the midst of a major homes shortage that’s driving up prices (maybe you’ve heard). The median sales price just hit a record of $341,600, and prices are up 19.1% from a year ago. It seems the American Dream of owning a home is alive and well, but the reality isn’t always HGTV-perfect. Nearly half (43%) of homeowners have at least one regret about purchasing their current home, including 64% of millennials. The red-hot market may be partly to blame. FOMO can lead buyers to hyperfocus on the house hunt and overlook the hidden costs. And underestimating those maintenance costs is the most common regret, not to mention a pricey one. Last year, homeowners spent an average of $13,138 on home improvement. There are financial upsides to owning (think: wealth accumulation and tax breaks), but take heart, renters. Renting is still an average of $606 cheaper than paying off a mortgage in the 50 largest US metros. Not sure if you should rent or buy? This comparison calculator can help you weigh your options.

If you pay them, they will come (to work)

A growing labor shortage has slowed the post-pandemic recovery, but businesses think they have the solution. Pay more, a lot more. Following four decades where wage purchasing power has barely budged, a number of name-brand businesses across industries are significantly raising their minimum wage to attract new hires: Under Armour ($15), Costco ($16), Hobby Lobby ($17), Bank of America ($25), and more. These pay increases come with a high price tag for companies. BoA estimates it will cost a few hundred million per year to maintain the new hourly rate. They certainly can afford it — the bank raked in $18 billion in 2020 alone. But while multinational corporations with deep pockets have the flexibility to hike salaries, smaller businesses that already run on razor-thin margins may continue to struggle staffing up.

Last year, we didn’t go to the movies (shocker). Summer theater earnings only hit $176 million, down 96% from 2019. Desperate to entertain, theaters turned to Netflix for new films to screen, and streaming platforms released movies online. But after a year of hitting “Play Something” and eating Raisinets on the couch, blockbuster movie season is back in a big way. North American cinemas raked in nearly $100 million in ticket sales over Memorial Day Weekend, the most since March 2020. Fast & Furious 9 took in $162.4 million internationally, A Quiet Place II brought in an estimated $48.3 million, and Cruella made an estimated $21.3 million. In other words, the movie industry never really died — like most of us, it just went into hibernation.

Imagine this: a Starbucks venti Strawberry Açaí Refresher, with three scoops of strawberries, three scoops of blackberries, and a scoop of ice, all blended together. Sounds like a treat — unless you have to make it. Extravagant orders like the infamous TikTok drink have gone viral, sparking controversy over the trendy, complex requests. The so-called “secret menu” concoctions aren’t hidden items, just beverages with several modifications that drive baristas “insane.” With increasing pressure from mobile and drive-thru orders, Starbucks workers say their pay is still too low and understaffed teams have to work like robots to keep pace with the influx of custom orders. So maybe tip extra next time you order a strawberry cheesecake Frapp?