June's job report breaks records, but the hiring spree may not last 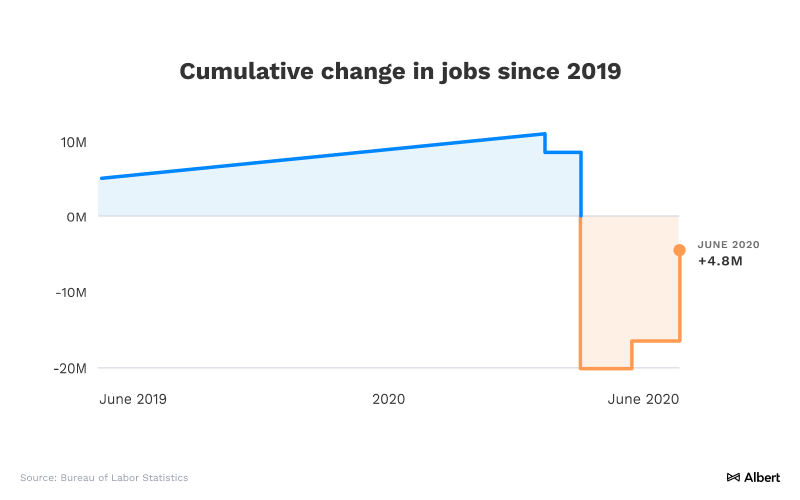 If you thought it was a great May for jobs

Then you're going to love June: the Bureau of Labor Statistics reported that nearly 5 million jobs were added last month, obliterating May's then-record of 2.7 million as reopened businesses returned people to their payrolls. The industry that suffered the most over the pandemic-induced shutdowns, hospitality, saw the strongest gains overall, adding 2.1 million jobs to account for more than 40% of the said gain. Of that multi-million gain, restaurant jobs were the largest factor, bringing back 1.5 million positions.

It also brought unemployment down across all age groups and genders, as the unemployment rate landed at just over 11%. While this would've been a post-WWII record level of unemployment, the sky-high rates of the last few months help put this statistic in a kinder light, suggesting that the economy is recovering quickly. Filings for unemployment last week also remained steady at a little over 1.43 million, which, while not nearly as vast an improvement as job gain, was still roughly in line with economist expectations and is 55,000 fewer applications than the week prior.

But plenty of potential gains remain

Still, there's a long road ahead to get us back to pre-COVID levels of employment: we're still down nearly 15 million jobs from February, and it's estimated that only three out of every ten jobs lost during the pandemic has been recouped. And not all sectors are rebounding at the same speed: government jobs have only increased by 33,000 over the last month, and remain 1.5 million lower than they were at the onset of the pandemic.

And our summer finances may not stay so sunny

This encouraging report contrasts sharply with reports of coronavirus diagnoses surging at record rates, causing some states to re-shutter businesses that had been open for mere days. Unfortunately, it's likely the hospitality industry could yet again bear the brunt of the closures' consequences: 72% of California's indoor restaurants have already been re-closed in the wake of growing COVID cases. With the rate of infection a constantly developing story, there's a chance July's report may not be a repeat performance of June's record-breaking numbers.